Tuscany is a treasure trove of unique historical riches throughout its
territory: it is abundant in cities of art but also in small picturesque
villages, extraordinary for its bewitching views, bucolic countryside and
rolling hills. Added to this are its cuisine of genuine flavours and its
wines, among the best in the world. Theis tour offers an unforgettable
experience with a concert by Maestro Bocelli at the Theatre of Silence. 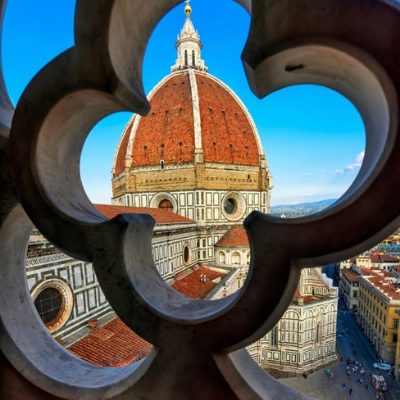 Meet with our driver at the airport and transfer to the “Savoy” hotel, where you will check-in and have time to relax. In the early afternoon, enjoy a private guided tour of the historic centre, a UNESCO World Heritage Site. For dinner, we recommend trying the succulent Florentine steak in one of the many traditional restaurants. Return and relax at the hotel. 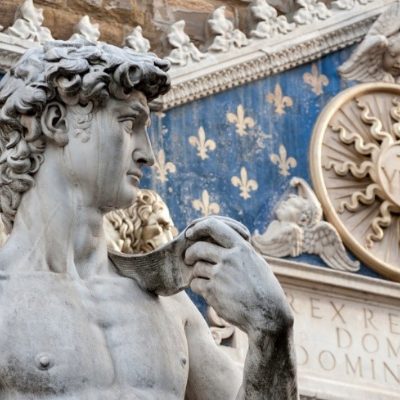 Have breakfast at the hotel, meet with our guide and enjoy a tour of the Uffizi Gallery, one of the most important art museums in the world, established by the Medici, lords of Florence, in 1560. Here you can admire very important works by the two Michelangelo’s, like Buonarroti’s Tondo Doni, and Merisi’s Sacrifice of Isaac and Bacchus. After lunch at the “Cantinetta Antinori”, reach the Accademia Gallery, which houses the main existing collection of sculptures by Michelangelo Buonarroti, including the famous David. At the end of the visit, enjoy an aperitif with wine tasting at “Procacci”. For dinner we recommend the “Ai Latini “restaurant, where you can enjoy an excellent Florentine steak. 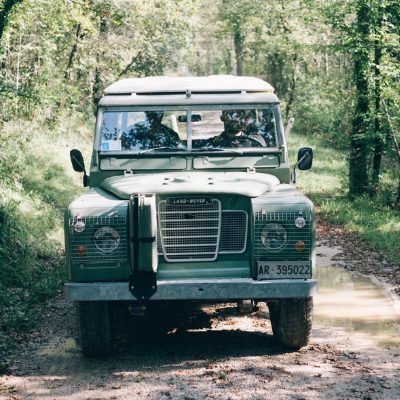 Have breakfast at the hotel and depart for a 4WD tour along the characteristic “white roads”, country cart tracks that cross the famous Chianti wine region; stop for a visit, accompanied by an expert, to the vineyards of a renowned winery and sample the oenological specialties, organic oil and honey, and a typical Tuscan lunch. After the visit, transfer to Castello di Casole, check-in at the hotel and enjoy a refreshing welcome cocktail. 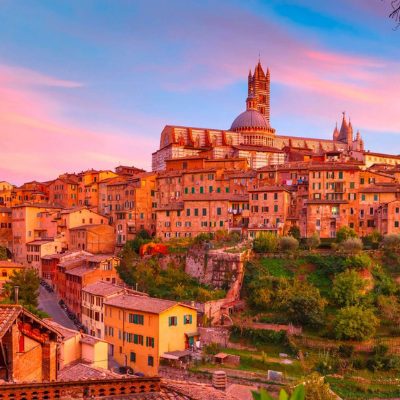 Have breakfast at the Hotel  in Casole before meeting our driver and departing towards Siena; immersed in the soft hills of central Tuscany, formerly an ancient Etruscan and then Roman centre,  between the 12th and 14th centuries Siena became one of the richest municipalities of medieval Italy, prosperous for commercial and banking activities, which increased its fame and influence across Europe. Of that opulence, the city preserves a wonderful historic centre, a UNESCO World Heritage Site; with our guided walking tour, explore the major artistic and architectural treasures of this wonderful city, such as the majestic Cathedral of the Assumption, a fourteenth-century Romanesque-Gothic masterpiece, admire works by Donatello, Michelangelo and Bernini, and the important patrician palaces Salimbeni, Tolomei and Chigi Saracini. After lunch (at leisure), continue on to another UNESCO World Heritage Site, San Gimignano, in the Crete Senesi, where the 16 survivors of the 70 noble towers that once designed the skyline soar above the town, warranting its nickname of ” Manhattan of the Middle Ages ”: in this delightful tangle of alleys and squares, the itinerary focuses on the Duomo, which boasts sublime cycles of fourteenth-century wall paintings, and the Church of Sant’Agostino, with the marvelous Renaissance frescoes by Benozzo Gozzoli. Return to the hotel in Casole, enjoy dinner a leisure and rest for the evening. 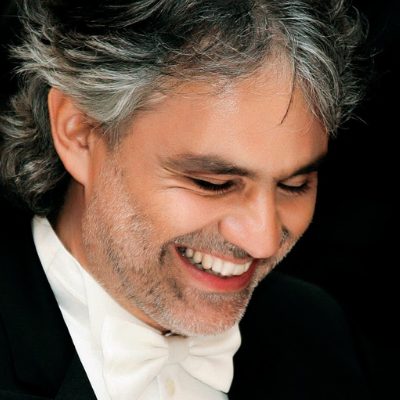 After breakfast enjoy some free time, perhaps relaxing by the pool, and in the early evening depart for Lajatico to attend Bocelli’s show with VIP entrance.

Return to the hotel in Casole, overnight. 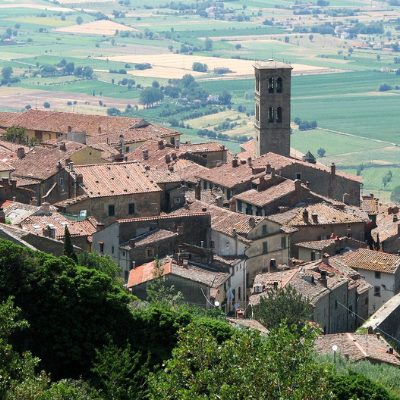 Enjoy breakfast at the hotel and get ready for a private transfer to Cortona.
After arriving and checking-in at the “Relais il Falconiere”, take the opportunity to rest in the beautiful hotel swimming pool, while admiring the Tuscan hills and beautiful views of Cortona. After lunch at leisure, for the afternoon we suggest a beautiful walk through lovely Cortona: founded by the Etruscans, is one of the oldest and most beautiful cities in the region; within its various attractions, its medieval buildings are what stand out in particular: the “Palazzo Comunale”, located at Piazza Della Repubblica, the Museum “Dell’Academia Etrusca”, where the city’s history is told through the ancient Etruscan, Roman and Egyptian pieces exhibited there and the Diocesan Museum and Church of San Francesco, built in 1245.

Return to the hotel and relax before dinner; we suggest the 1* Michelin restaurant at the Relais il Falconiere.

Enjoy breakfast at the hotel, then meet with our guide and driver for a full day in Montalcino and Montepulciano including a Wine Tasting and lunch in Montalcino.

This wine tasting tour takes place on a beautiful estate in the hills of Montalcino, which boasts a biodynamic vineyard covering 75 hectares, and focuses on the excellence of this territory, Brunello, one of the most famous Italian labels in the world. The visit allows you to discover the various productive steps, to taste five varieties of wines and is crowned by a lunch with traditional local dishes that combine the freshest raw materials with a culinary creativity of international scope.

Return to the hotel Relais il Falconiere and relax for the evening. 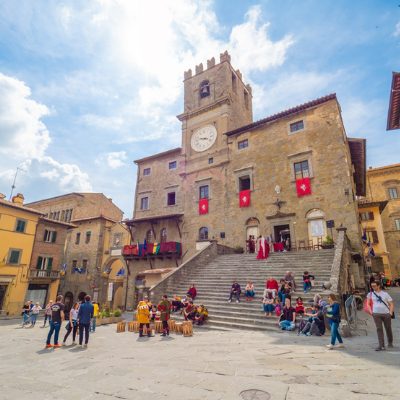